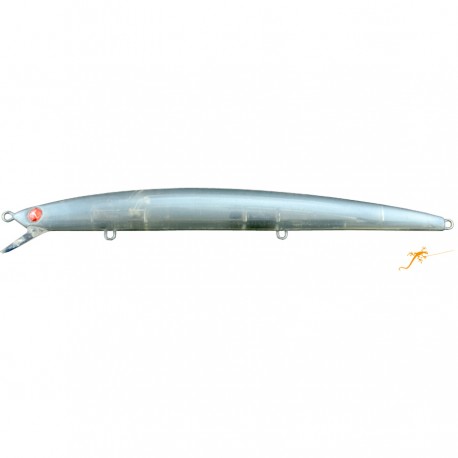 The Mommotti 180 SS is a marine jerk that in a very short time has received a great consensus from European fishermen. It has been designed to guarantee long casts in the most difficult marine weather conditions and continuous flashes during jerks. A fundamental lure for the Mediterranean. We have deliberately sought a weight-volume ratio that would guarantee us the necessary range on the one hand and a refined lightness in swimming on the other, both in linear recovery and in jerking, which makes it particularly stable even in the presence of lateral and lethal currents even in confrontations of apathetic predators. The choice of the through armor then forced a particular design effort in the internal distribution of tungsten weights with constant attention to the perfection of the swimming action. Suitable for all predators such as sea bass, bluefish, barracuda, lecce, mahi mahi, sea bass, amberjack and tuna. For the Mommotti 180 SS the attention of the designers has focused on four distinct points: the positioning of the internal weights to further increase the already long range of the lure in the launch phase, the slight thickening of the headstock as further protection for the accidental breakages, a thickening of the containment baffles of the internal mobile weights and the use of the reinforced Seaspin Très T3X treble hooks. Characteristic of the falling lure is a slight roll which is particularly attractive towards sea bass and barracudas. Research has led to the creation of a slight ventral curvature of the lure which confers greater instability in swimming and was particularly attractive towards predators.

Slow recovery: rolling Regular recovery: wobbling & rolling Fast recovery: wide wobbling "Jerk" recovery: To stimulate the aggressiveness of the fish it is recommended to give strong accelerations with the rod in single or multiple sequence, so as to force the lure to make large skids. Interval the jerks with pauses and / or a variable recovery.

There are no reviews